Lung cancer is one of the most common types of cancer, which unfortunately has a high death rate.

Many researchers are trying to speed up the treatment by early detection of this cancer and reduce the percentage of patients who die from this cancer.

In one of Tecvico's research projects, we used artificial intelligence and deep learning algorithms to identify cancerous tumors by processing patients' lung images;

For this research project, a dataset including CT scan, PET scan and MRI images of thousands of lung cancer patients was used.

Of course, this research has been done by many researchers and scientists in the past, but we tried to create a deep learning model that has higher performance and accuracy using the techniques of Attention map and Feature fusion.

What is lung cancer?

Lung cancer is a disease that causes abnormal proliferation of lung tissue cells and reduces a person's ability to breathe.

Cancer spreads to DNA after genetic damage. This genetic damage leads to unauthorized proliferation and division of cells, which eventually leads to a mass called a tumor; Lung cancer may not have any specific symptoms in the early stages, it is not diagnosed in many people until it progresses.

Respiratory problems, persistent cough, hoarseness, weight loss, chest and bone pain are some of the symptoms that may be a sign of lung cancer in people.

People who have a history of smoking or people over 60 are at higher risk.

There are several ways to diagnose lung cancer:

In this method, sound waves are used to examine the structure of the tumor in the lung.

A PFT test is done to check a person's lung function and breathing rate.

Testing for cells in the sputum that rise from the lungs through coughing is a good way to test for cancer.

Lung biopsy is a definitive way to diagnose lung cancer.

Of course, lung cancer is not easily detected in the early stages;

Diagnosis of lung cancer with the help of AI

We mentioned different methods for diagnosing lung cancer, the results of these tests should be checked by a specialist doctor to determine the patient's condition. In this process, in addition to the possibility of human error, it takes a lot of time and money to determine if a person has lung cancer.

Given that early detection of cancer can save a human life from death, the use of artificial intelligence and automation of this long process can be very helpful.

The TNM system is often used to classify the stages of lung cancer:

-T size and location of the tumor.

-M metastasis, or how widespread the cancer is.

The stages of lung cancer based on the size of the tumor and its spread are as follows:

Cancer is not detected on imaging scans, but cancer cells are present in the sputum and may have spread to other parts of the body.

Abnormal cells are found only in the upper layers of the airway epithelial cells.

The tumor in the lung is less than 5 cm in size and has not metastasized to other parts of the body.

The cancer has spread to other parts of the lungs, surrounding tissues, and lymph nodes.

At this stage, the cancer has spread to different parts of the body, such as the bone or brain, and has metastasized.

Determining the stage of cancer by processing lung images

As mentioned, to determine the stage of lung cancer, the size of the tumor and the extent of its spread are used. This diagnosis is usually made by imaging the lungs.

Artificial intelligence can predict the stage and rate of spread of lung cancer by image processing methods.

About 80% to 85% of lung cancers are NSCLC. The main subtypes of NSCLC are adenocarcinoma, squamous cell carcinoma, and large cell carcinoma. These subtypes, which start with different types of lung cells, are grouped as NSCLC because their treatment and outlook are often similar.

About 40% of lung cancers are adenocarcinomas and are mostly found on the outside of the lungs. This causes the tumor cells to grow more slowly than the other two subtypes, so it is more likely that the tumor will be removed before it spreads. 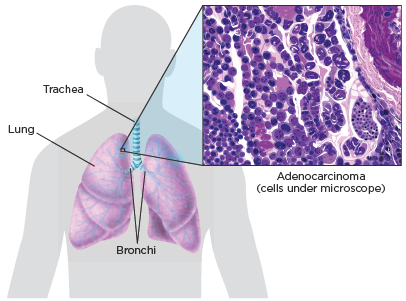 Squamous cell carcinoma begins in squamous cells that are flat and located inside the airways of the lungs. They are often associated with a history of smoking and tend to be located in the central part of the lungs, near the main airways (bronchi). 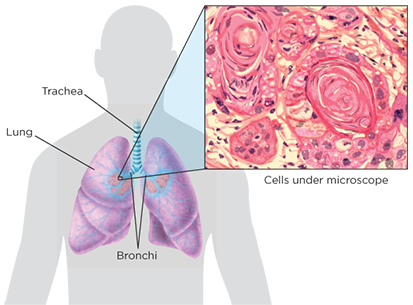 Large cell carcinoma can appear in any part of the lung and tends to grow and spread rapidly, which can make it difficult to treat. 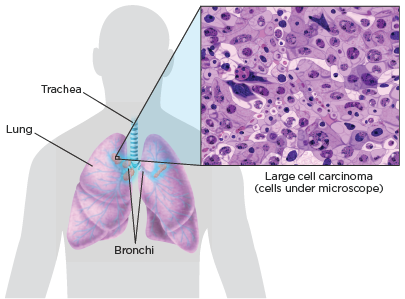 About 10 to 15% of all lung cancers are SCLC. This type of lung cancer grows and spreads faster than NSCLC. Because the cancer grows rapidly, it responds well to chemotherapy and radiation therapy.

Segmentation of lung cancer images and diagnosis of its type

For example, artificial intelligence can detect the type of lung cancer by processing lung scan images according to the type of tumor and its location; 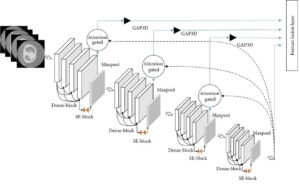 To improve the accuracy of the deep learning model, we have used techniques such as Attention map and Feature fusion.

Indicates the relative importance of activating layers in different locations of two-dimensional space according to the task at hand. For example, the attention map is a network of numbers that show what 2D locations are important for a task.

Simply put, the Attention map shows the areas with the tumor in the lung scan with a bolder color than the other parts: 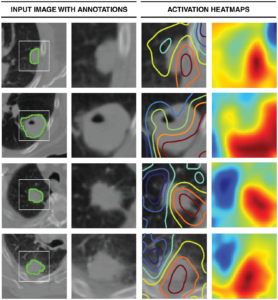 Feature fusion is an important method of pattern recognition and helps the model learn image features to fully describe its valuable internal information. And then reduce the dimensions to get a compact view of the integrated image features;

This process results in image processing with less computational complexity and better performance.

In other words, in this method, a set of features from several sources are merged into a single feature using appropriate normalization, transformation, reduction;

I am a student of artificial intelligence.

Use of machine learning in industrial projects

The role of AI in business processes

Benefits of collaboration between university and industry